Spoilers for Metroid will be left unmarked. You Have Been Warned! 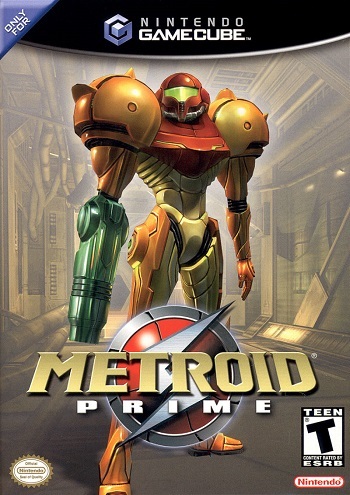 Evil Waits Below The Surface...
"Something sinister lurks in the depths of planet Tallon IV. Interstellar bounty hunter Samus Aran is the only one who can destroy this evil... but first it must be found."
— Boxart Tagline
Advertisement:

Please note that this page and links to it are meant to cover the first game only. The link titled Metroid Prime Trilogy is for the sub-series as a whole.

Metroid Prime is a 2002 First-Person Adventure for the Nintendo GameCube. It is the fifth game in the Metroid series (released on the same day as Metroid Fusion), the first of the Metroid Prime Trilogy, and the first Metroid game to be in 3D. Timeline-wise, it's the second game in the franchise's chronology.

The story takes place some time after the events of Metroid/Metroid: Zero Mission. After destroying the Space Pirates' base on Zebes along with the Pirate leaders Mother Brain, Ridley and Kraid, Samus Aran continues to pursue the scattered fleeing survivors across the galaxy and ultimately tracks them to their fallback position on the planet of Tallon IV, located in the same star system as Zebes. There, the Pirates have set up a secret research base, where they have resumed Metroid cloning, started reconstructing Ridley's heavily injured body, and are harvesting a new power for their own ends; a radioactive mutagenic substance called Phazon, containing nigh limitless energy potential.

The Hunter must explore and battle her way through the world's lush and myriad environs, putting down Space Pirate operations wherever she finds them all while fending off aggressive, Phazon-mutated lifeforms. But in searching for the origins of why her enemy chose this world to plunder, she discovers an age-old conflict which extends much further, to when her adoptive people the Chozo still called this place home. Something terrible from the stars came to Tallon IV decades ago, bearing corruptive Phazon and an enemy greater still, sleeping within the Impact Crater...

Metroid Prime is the very first game made by Retro Studios. The company initially worked on several rudimentary game prototypes upon their founding in 1998, one of which was a First-Person Shooter engine (many Retro employees had previously worked for Acclaim and Iguana Entertainment on the Turok games). Shigeru Miyamoto suggested that they use this one to make a new Metroid game, the first in the series since Super Metroid in 1994. While Metroid series co-creator Yoshio Sakamoto had little direct involvement with Prime (being busy making Metroid Fusion), Super Metroid composer Kenji Yamamoto would return to provide the soundtrack, while Miyamoto would also serve as a producer. The original GameCube release would include bonus content that could be unlocked by linking with Fusion through the GameCube – Game Boy Advance link cable.