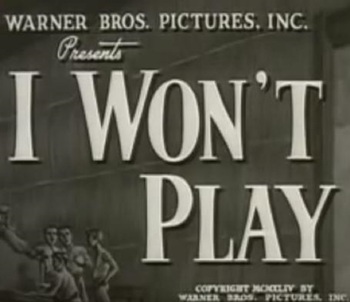 ". The shooting having stopped, the island's Marine garrison is occupying the island under conditions of extreme boredom. They're so bored, in fact, that they enjoy listening to the tall tales of an obvious liar, one Joe "Fingers". Joe claims to have been a successful band leader, and not just that, but an entertainment guru that seemingly did everything and knew everybody—he got Frank Sinatra his big break, he helped George Gershwin write "Rhapsody in Blue", he gave Humphrey Bogart acting tips. When another Marine hangs up a picture of (fictional) pin-up girl Kim Karol, Joe claims to have discovered her.

The garrison receives, of all things, a piano, presumably for R&R. The other Marines excitedly ask Joe the professional musician to play, but he refuses. The other Marines decide that Joe is just a big liar, and they begin to shun him. But when Kim Karol herself (Janis Paige) shows up at the island on a USO tour, the other Marines get a surprise.