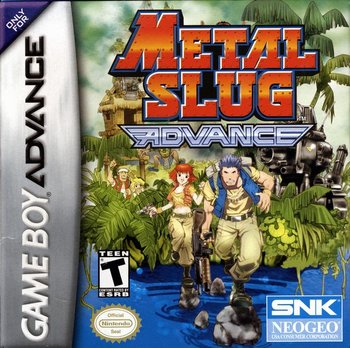 Notice Marco and Eri in the back there? Yeah, they don't show up in-game at all other than as cards.
Advertisement:

Metal Slug Advance is a 2004 spinoff of the popular run and gun series developed by Noise Factory for the Game Boy Advance. It follows the adventure of Peregrine Falcon recruits Walter Ryan and Tyra Elson as the island they've been training on is invaded by General Morden's troops.

Although obviously downscaled, it is closer to the gameplay of the main arcade games than the Mission games for the Neo-Geo Pocket were and follows the usual linear 5 Missions structure. It still keeps the life gauge for when the player is on foot, though, and introduces upgrades that can be found hidden through each stage.