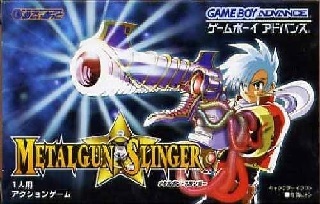 Metalgun Slinger (メタルガン・スリンガー) is a 2002 action Platform Game developed by Open Sesame and released only in Japan by Atmark for the Game Boy Advance. The story follows the adventures of Billy MacDoleane, a cowboy who must fight off a parasitic alien menace with his trusty Metalgun.