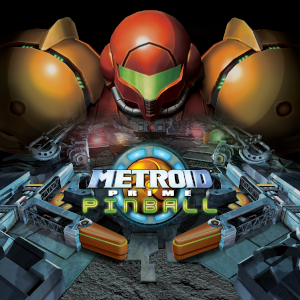 Metroid Prime Pinball is a pinball adaptation of the plot of the original Metroid Prime that was developed by Fuse Games for the Nintendo DS in 2005.note Despite what you may think, this is actually the second time Samus has appeared in a pinball game: the first was the Virtual Boy exclusive Galactic Pinball, wherein you could play short shoot-em-up segments using Samus' gunship if you meet the right conditions on a stage. In it, famed bounty hunter Samus Aran hunts down the Space Pirates and the source of the mysterious corruptive power source known as Phazon. But this time, she spends far more time in her trademark Morph Ball form and allows clever flipperwork to do the rest.
Advertisement:

It boasts a total of seven boards based on the game, though only two are fully playable. Three exist solely for boss battles, one is essentially a multiball Wizard Mode and one is exclusively multiplayer.