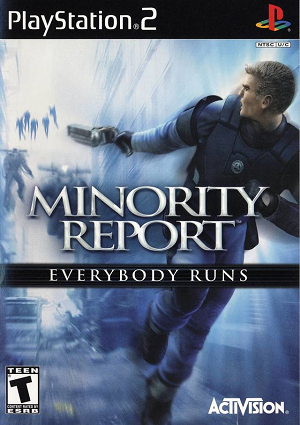 Minority Report: Everybody Runs is a 2002 Beat 'em Up game by Treyarch (later known for their work on Call of Duty: Black Ops), based on the Steven Spielberg Minority Report. It was released on the PS2, GameCube, and Xbox.

The protagonist has the same name as that of the film, John Anderton. However, Treyarch couldn't get the rights to Tom Cruise's likeness, and so he looks nothing like his namesake from the film, being older and white-haired. That's only the first of the substantial differences between the way the character acted in the film, and how he ends up acting in this game.

The game tells a similar story to the movie, about an officer of the future crimes division (Pre-Crime) being predicted to murder a seemingly innocent man, forcing him to go on the run while trying to discover why he was predicted to do such a crime against a person he doesn't know, leading to him discovering a larger conspiracy at play involving the manipulation of the system used to predict crimes.