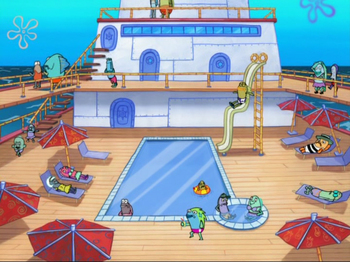 When a show needs a one off episode to let the characters rest or relax, then it's typically a Vacation Episode. Various locations include ski lodges, the beach and camp sites. Another common location for the characters to flock to is a cruise ship.

Cruise Ship episodes often kick off with the protagonists winning tickets or being invited on a cruise. They rarely arrive anywhere, even if there was an intended destination. The safety of the ship is threatened, the protagonists cause too much mayhem and have to be forced off, or maybe the cruise ride wasn't intended to be longer than a day. Either way, expect sea sickness, Buffet Buffoonery and Cabin Fever.

An episode with this trope can also become a Beach Episode, since most cruise ship destinations are tropical beaches. It may even lead to being shipwrecked on a Deserted Island.