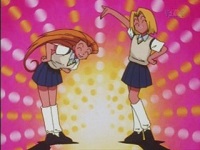 After winning a Thunder Badge, Ash and his friends want to go on a cruise but know they can't afford it. Out of nowhere two girls show up and give them free tickets, saying that they don't need them anymore. While our heroes leave to the port, excited by their lucky prize, these two girls are revealed to be Jessie and James in disguise, and they enter into their secret base where Meowth briefs their success to a shadowy figure they call the Boss. It turns out that the St. Anne cruise is really a ploy devised by him to lure trainers in and steal their Pokémon.

Ash and company get on board the boat and Ash has a Pokémon battle with a rich, older man who later convinces Ash to trade his Butterfree for a Raticate. Meanwhile, James encounters a salesman selling a Pokémon known as Magikarp. The salesman tells James that Magikarp can make him rich by laying a thousand eggs that hatch into more Magikarp laying another thousand eggs each. Lured by the salesman's words, James eagerly spends all of his and Jessie's salary advances to buy Magikarp, unaware that the salesman had sold him a worthless Pokémon.

As the ship sails through dark clouds, the Boss gives the signal. Doors are shut, and various crew members reveal themselves to be Team Rocket grunts. Led by the trio, they attempt to steal all the Pokémon on board, but Ash convinces the passengers to fight back. During the battle, Ash begins to regret his decision to trade Butterfree after realizing that Raticate wasn't the same. The Rocket grunts are thwarted and blasted off save for the trio, and in the aftermath, Ash decides to trade back Raticate for his Butterfree. Unfortunately the ship has sailed into a storm during the fight, and the rough waves knock Ash, Misty, Brock, Pikachu, and Team Rocket out cold. When the ship sinks, Ash and his friends are still on board.