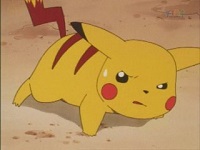 You have got to be kidding me, that guy is twice my size!
Lt. Surge: Ha! What kind of a baby would do that? If you wanna be a real Pokémon master, you should have your Pokémon evolve as soon as you catch it.
Ash Ketchum: There's more to training a Pokémon than forcing it to evolve, and I like this Pikachu just the way it is.
Lt. Surge: Wrong, baby. Electric Pokémon are only useful once they've learned all their electric attacks. You keep it puny like that, it's no more than a little pet.

Ash and friends have finally made to Vermilion City, but they soon discover that the Vermilion Gym Leader is the brutal Lt. Surge, who is notorious for having a record of trainers running to the hospital with their injured Pokémon. After being mocked by Surge for being a weak baby, Pikachu decides battle Surge's main Pokémon, Raichu, its evolved form. The match ends badly as Pikachu is badly crushed by its larger opponent (both figuratively and literally), and is taken the Pokémon Center for recovery.

After losing to Surge and hearing his harsh advice of evolving Pokémon as soon you can, Ash contemplates evolving Pikachu using a Thunderstone. What will he decide? Will he earn his Thunder Badge after all?