Spoilers for all Metroid works preceding this one, specifically Super Metroid, will be left unmarked. You Have Been Warned! 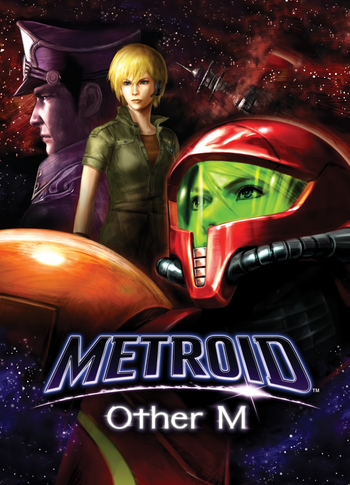 The tale of Samus can now be told.
"Any objections, lady?"
— Adam Malkovich
Advertisement:

Released in 2010, Metroid: Other M is the second original Metroid game released for the Wii, following Metroid Prime 3: Corruption. The first and only 3D non-Prime entry in the franchise, the game is a third person action-adventure/platform game developed by Nintendo SPD in collaboration with Team Ninja (of Dead or Alive fame) and animation studio D-Rockets under the name "Project M".

After the events of Super Metroid, Samus Aran is contemplative about her final battle against Mother Brain and the death of the infant Metroid. With both the Metroids and the Space Pirates no longer a threat, she spends quite some time drifting through space and dwelling on these thoughts until she picks up a distress call from a decommissioned biological research station known as the Bottle Ship and sets out to investigate. Once there, she encounters a Galactic Federation platoon that also picked up the signal, and also happens to include some familiar faces from Samus' military past: Anthony Higgs, her best friend from the academy, and Adam Malkovich, her former commanding officer. While she's happy to reunite with the former, she has mixed feelings about seeing the latter again, with him being incredibly cold and dismissive in return. However, as they begrudgingly work together to figure out the truth about the facility's operations following a surprise monster attack, Samus finds herself forced to come to terms with the events surrounding her military past as well.