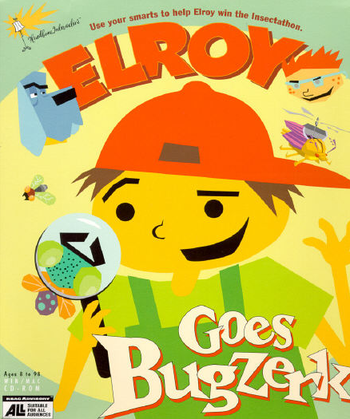 Elroy Goes Bugzerk is a 1995 Point-and-Click Adventure Game for Apple Macintosh and Windows PCs by Headbone Interactive. The game stars Elroy, a bug-loving boy who is looking for a bug that will win the upcoming annual Insectaton. His rival, Gordon Smugs, has caught a Hercules Beetle and is slated to win the contest. To make matters worse, his parents are leaving for the weekend and Elroy must stay with his uncle at the farm, meaning he'll miss the contest. If that wasn't bad enough, his dog Blue eats his aunt's birthday cake. The one bright spot to Elroy's day is an encounter with the technoloptera, a rare beetle that could defeat Gordon's Hercules beetle. Elroy must explore the farm to capture the technoloptera and find an egg so he can bake a new birthday cake.

The game is also an Edutainment Game, teaching kids about entomology.

Also has a sequel, Elroy Hits The Pavement.