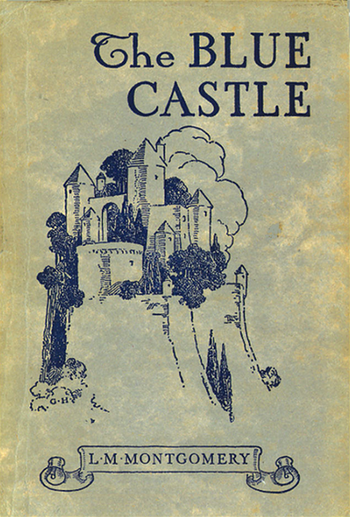 As the book opens, Valancy wakes up on her 29th birthday morning consumed with bitterness over what has actually been a wasted, downtrodden life, dominated by her overbearing mother and multitude of equally stiff-necked, relentlessly conventional relatives. Valancy's only escape is through her daydreams as the chatelaine of a beautiful blue castle in Spain, complete with handsome Prince Charming.

When she finds out later on the same day she has a terminal form of heart disease and only a year left at best, she finally snaps at the prospect of dying before she has even had a chance to live. Instead she blossoms into a free-spirited Deadpan Snarker who doesn't hesitate to tell off her family to their faces (as she hasn't told them why—the better to avoid their even more smothering pity—they conclude she's lost her mind) and realises for the first time that she's actually quite pretty.

Her world widens even further when she unexpectedly gets her chance to leave home altogether and have some real, meaningful adventures. In the course of which she makes friends with her fellow town pariahs: Roaring Abel Gay, the notorious town drunk; his sweet, sensitive daughter Cecily, an unmarried mother dying of tuberculosis; and Barney Snaith, a rumored criminal and confirmed hermit living in a backwoods island cottage—and soon to become Valancy's love interest...

One of only two novels intended specifically for an adult audience that Montgomery ever wrote (the other is A Tangled Web (1931)) and consequently sadly underrated.