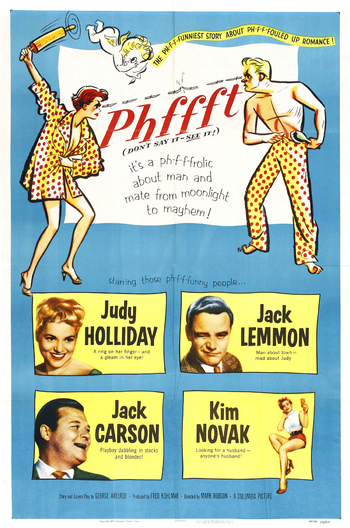 After eight years of marriage, Nina (Holliday) and Robert Tracy (Lemmon) decide to split up. With the divorce painlessly done, Nina washes her hands of Robert during her stay in Reno, and decides to take her mother's advice and get back to the dating scene. At the same time, Robert moves in with his friend, failed playwright Charlie Nelson (Jack Carson), and is also pressured to date. Charlie, the ever suave ladies man, convinces Robert to date the not-too-smart Janis (Kim Novak), a young floozy.

But getting back into circulation makes both Nina and Robert weary, especially when they keep running into each other wherever they go. They try their best to distract themselves from the old bubbling feelings, but things come to a head when they share a mambo dance.

This light Romantic Comedy was Lemmon's second film appearance, and reunited him with Holliday, who'd costarred in his first film, It Should Happen to You. The film was directed by Mark Robson, and adapted by screenwriter George Axelrod from his stage play of the same name.

Tropes in this work are as follows: