This covers the various characters of Quest 64 as well as its Gameboy remake, Quest RPG: Brian's Journey.

This page needs serious love. Please be a kind soul and help.

Our Protagonist. The son of Lord Bartholomy.

A beautiful young woman with white hair and a slightly detached, dispassionate outlook on life. She follows Brian in his quest, weighing in with tidbits about history, the local scene, and matters philosophical. Given her continual presence, it is possible she was going to fight at Brian's side.

A fellow magician and possible party member, once upon a time.

A presumably spunky princess and a cut party member.

The first person to speak in the game and fill you in on the backstory. He has no relevance after he delivers the speech.

Brian's missing father, constantly two steps ahead of him until the end where he gets defeated by Shannon. A great magician.

&&* Badass in Distress: So the other guys claim, at least.

A goddess and powerful magician who helps Brian at two steps along his journey.

A mysterious magician, and the last of his kind, found in a semi-hidden desert city sealed from the rest of the world. 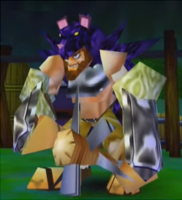 A hulking mountain of a man and the first boss.

A twiggy wind magician getting revenge on all those who belittled him.

A spell-slinging nymph who has it out for Brian.

A buxom cultist devoted to Mammon.

A renegade pyromancer currently hiding out in an active volcano. 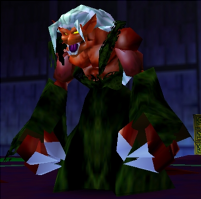 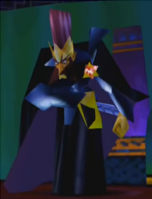 The penultimate enemy, a sword-swinging despot armed with black magic. 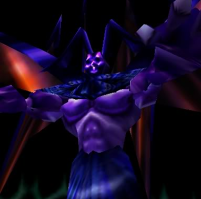 for final boss.
An unspeakable horror from beyond time and space. He's here to finish the job he started on the Day of Grief.

A recurring foe and one of the iconic enemies of the game, both for its relative difficulty and for its impressive Jay Leno chin.

An assortment of oddities out to kill the hell out of Brian. A surprisingly diverse lot, even with the occasional pallet swap and model swap.