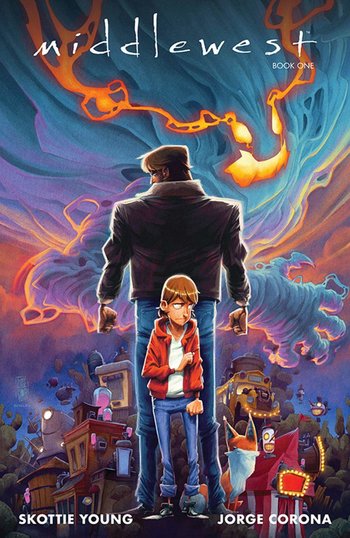 Predictable. Normal. Boring. Most days in Farmington are like any day in any small town in the heartland, but Abel is used to it. He runs his paper route, tries to keep up with schoolwork, and aims to stay on the good side of a volatile single parent. One fateful day, however, Abel's ideas of normalcy, safety, and security are blown away as a storm levels Farmington just as quickly as it appears. What's more, the storm is chasing Abel — and it knows his name.

Middlewest is an adult Fantasy Comic Book series written by Skottie Young, illustrated by Jorge Corona, and published by Image Comics. The series follows Abel, a young boy living in a small town, and his ally, an unnamed fox, as he journeys across the farthest unknown reaches of the Middlewest. After his father infects him with the Heart of a Storm, Abel must seek help from several mystical people and creatures to find answers as to how to remove the Heart of a Storm from his body before it causes damage to those he's grown close to.

Middlewest has produced 16 issues so far, which have been compiled into two collections.

The covers of the first six issues were drawn by Mike Huddleston.