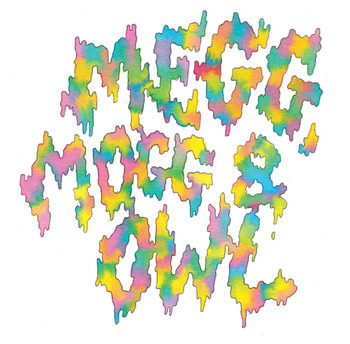 "What at first glance reads like an episodic stoner comedy slowly reveals a chiseled character study of suburban ennui to rival the works of Solondz, Groening, or Flaubert. Hanselmann's characterization and visual creativity mines lifetimes of pathos from the slapstick simplicity of its psychedelic, absurdist premise. You will believe an owl can cry."
—A blurb on the back of Megahex
Advertisement:

Megg, Mogg and Owl is a series of comics written by Simon Hanselmann, a Dark Parody of Meg and Mog. The series primarily follows Megg, a clinically depressed witch who lives an unfulfilled life. Most stories revolve around the drug-fueled debauchery that takes up most of her time. Accompanying her on these misadventures is her boyfriend Mogg, a talking cat, and Owl, their neurotic flatmate. Also present for many of their escapades is Werewolf Jones, a mentally-ill and sex-crazed drug dealer.

On the surface, the series appears to be a light-hearted stoner comedy with some Magic Realism elements. As it progresses, it reveals itself to be much more complex and dramatic than just that. The collected stories deal with topics like alienation, substance abuse, mental illness, poverty, and arrested development. The central plot thread of the series (such as it could be argued) is the title characters' inability to mature, evolve, or work through their emotional problems as they approach their 30's without having done anything with their lives. Beneath the Black Comedy is a tale of sad, broken people trapped in a miserable situation as much by themselves as they are by each other.

Aside from the above zines, Hanselmann began working on an Alternate Continuity series, which can be read on his Instagram.

Crisis Zone was written in real-time and deals with the cast as they try to survive COVID-19, a kidnapping, and WWJ getting a Netflix show. This story was serialized and relied on continuity, but the story and humor were just as absurd as ever. At the time of its conclusion in December of 2020, it was the longest continuous story in the entire series.