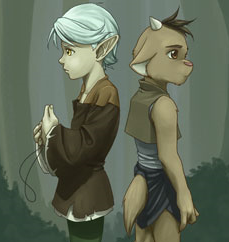 Where it all begins. Sort of.
Advertisement:

follows the adventures of a young da'kor named Acheron. Unlike other young male da'kor, Acheron is not overly violent or aggressive.

The story begins with Acheron running into Shiara, a young elf. He quickly falls for her, but she holds back from him. She explains that when she was young, she was engaged to a silver-haired elf named Kayn'dar who was kidnapped by a dark mage when they were both 6. Kayn'dar was special, being the only elf born with silver hair who could still use magic, and he was believed to be the only hope for the elves, who are losing their magic and immortality more and more in each generation.

In order to give Shiara closure or happiness, Acheron chooses to venture forth and look for Kayn'dar. He takes with him a small pendent, which was purported to belong to Kayn'dar before he vanished.

Along the way, he teams up with Lei'ella, a thief catcher who hides herself under a hooded cloak because she is one of the silver-haired, mortal elves, called the Severed. She was exiled from the elven community for her affliction at the age of 12. They are joined by Varden, a handsome young thief and a foil for Lei'ella. Their final companion is Neirenn, a powerful young mage who is seeking the elven magic of healing.

They will discover that not all is what it seems with the kidnapping 12 years ago, nor with Kayn'dar and Acheron themselves.