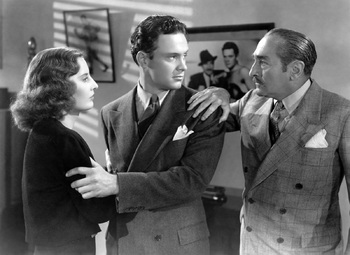 Golden Boy is a 1939 film directed by Rouben Mamoulian, starring Barbara Stanwyck, Adolphe Menjou, and a young, smooth-faced William Holden in his Star-Making Role. It was adapted from Clifford Odets' Broadway play of the same name.

Boxing manager Tom Moody (Menjou) and his Girl Friday/mistress Lorna Moon (Stanwyck) are in a bind after their fighter gets hurt while sparring—Tom happens to still be married and needs $5000 for his divorce, which he can't get without a fighter to promote. Enter Joe Bonaparte (Holden), the sparring partner who hurt their boxer. Bonaparte wants a shot at the big time, so Moody takes him on and starts getting him fights.

Joe's father is violently opposed to his becoming a boxer. What Tom and Lorna don't know is that Joe also happens to be an accomplished violinist, and his father has long cherished dreams of Joe making it as a musician. To get an indecisive Joe to commit to boxing, Tom pushes Lorna at him. Unfortunately for Tom, Lorna starts falling for Joe for real.

In 1982, four months after William Holden's death, Stanwyck was given an honorary Academy Award. She closed her speech with a shout-out to Holden, saying "I loved him very much, and I miss him. He always wished that I would get an Oscar. And so tonight, my golden boy, you got your wish".