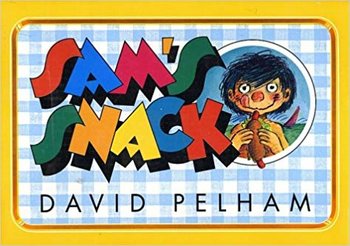 If I get seasick, so should he.

Sam's Snack is a pop-up Picture Book by David Pelham and is part of the Sam & Samantha Book Series. In it both Sam and Samantha are spending time at the beach when they get invited to go on a ship. Unfortunately Samantha gets left behind since she can't go due to seasickness. So in revenge she sabotages Sam's lunch. It was published in 1994.