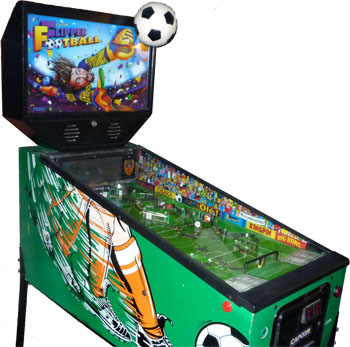 Flipper Football is a 1996 arcade pinball game from Capcom Pinball. It was designed by Bryan Hansen and Python Anghelo, with illustrations by Hugh Van Zanten.

Flipper Football was promoted as an "electromechanical replica" of Association Football, a claim that it fully lives up to. Instead of the overinflated scores and objective-based gameplay in most pinball games, the player simply tries to score the most goals against the opposing team. While the crowds cheer and cuss, move the pinball up the playfield, knock down the dropdown targets to open an opportunity, then shoot the ball into the goal before they pop back up. Draining the ball counts as a goal against the player, and the game ends when the clock runs out. The game supports up to six people, placing them into teams against each other.

By all accounts, having multiple players makes Flipper Football a terrific and rowdy party game, accurately recreating the wild frenzy of a soccer match. However, uneven teams almost always led to blowouts, while the single-player experience was simply too dull and unorthodox for most players. In the end, only 750 machines were made before the company closed its pinball division, leaving Flipper Football a memorable (if foul-mouthed) coda to Capcom Pinball's history.