Webcomic / Prophecy of the Circle 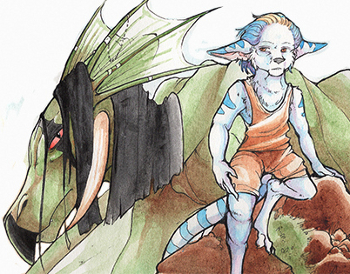 Two main characters from the webcomic: Shan'rekk and Jahrd.
Advertisement:

Prophecy of the Circle

is a webcomic by Meghan Taylor.

The setting is a world shared by two sapient species, the mammalian tikedi and reptilian/avian tekk. There's no common language between the two, nor is there any will to communicate — the only interaction between them has always been violence. But since neither of them could afford to eradicate another, a set of rules ensuring their relatively peaceful coexistence was formed over the centuries, mostly by trial and error. Those rules, known to tikedi as the Circle, outline the races' territories as well as when and where they are allowed to hunt and kill each other.

The story is split in two concurrent parts.

The main chapters follow a young tikedi named Jahrd who got to experience the Circle first-hand, when a tekk killed his mother before his eyes. Anguished by this and finding the Circle biased in tekk's favour, he sets out to learn the ways of the tekk and understand why his mother had to die.

The shorter interludes in turn focus on tekk leader Shan'rekk. Concerned with the Tieke (one of tikedi nations) growing more powerful and less respectful of the tekk to the point of overturning the balance, he intends to foster communication and understanding between the two species to allow for more peaceful coexistence — a plan in which Jahrd, with his deep fascination with the tekk, is going to play a role.