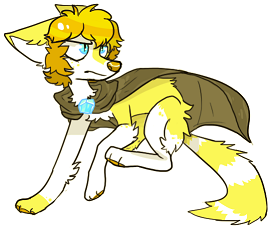 Our reluctant hero, Litho.
"There is no show without an Audience!"
Advertisement:

Audience! is the second web series from Run To the Battle Productions. This show is incredibly ambitious for an independent project, with a full voice cast, and original soundtrack.

The stage is a land of talking quadrupeds and feudal kingdoms upturned two decades ago by "seams" in reality splitting apart, unraveling logic and order. Litho is a young loner whose only friend is his sister, Rags. He lives in the Quasar Kingdom, ruled by King Oxymoron, though everyone calls him Oxy. Even for The Stage this kingdom is quite peculiar, and circumstances can only grow more curious, as the villainous Showtime has arrived, and he intends to throw quite a party!

It is something of a Spiritual Successor to RTTBP's previous series, The Birds Are Working. This series is technically a Continuity Reboot that subjected a large amount of that series to Canon Discontinuity to the point of being an entirely new series altogether.