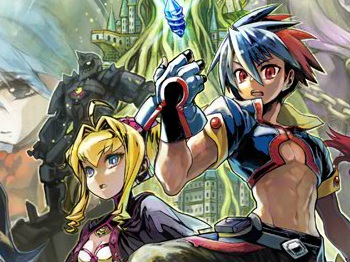 Legasista is an Action RPG that was released on the Play Station Network in 2012, developed by System Prisma (makers of the ClaDun series, to which this game bears many similarities) and published by Nippon Ichi Software in America.
Advertisement:

A young explorer named Alto Straiter discovers a place called the Ivy Tower, a large tower covering up the remains of an ancient railyard. He believes that the magic within the tower can help him restore his sister Mari, who was transformed into a crystal as the result of a curse.

Along the way, he runs into Melize, a Robot Girl built from the technology in the ruin. When she sees Alto for the first time, she is prepared to kill him for trespassing, but an explosive accident robs her of all of her memories, including the means to break Alto's sister's curse. All hope appears to be lost, until Alto and Melize discover data chips within the Ivy Tower that help restore some of Melize's lost functions. After consuming one of these chips and hearing Alto mention his cursed sister, it triggers something in Melize's memory bank that feels important to her, yet she doesn't understand why. With this knowledge, Alto and Melize brave the Ivy Tower's numerous monsters and traps in hopes of finding the things they are looking for...