Back That Light Up 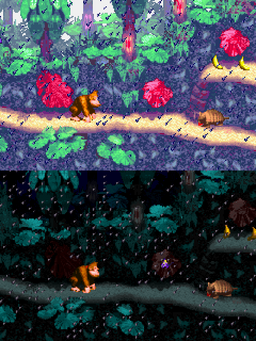 Different viewing media affect how colors look on them, but also are even further affected by how the medium is lit.

There are three main types of lighting that apply here:

There are different ways to make the light, but those just change the exact look of the colors. Those three types change the contrast. Different colors wash other colors out depending on the setup.

One effect of this is that in a presentation, you would likely use different colors for the same graphs, depending on whether a graph is on printed paper, or on a PowerPoint slide.

Where this is particularly prevalent is in gaming, especially if you are playing on a handheld. Take the Game Boy line.