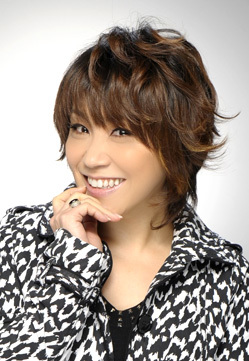 Even her coat is Hot-Blooded.
Advertisement:

Typecast as the Kid Hero since her Star-Making Role as Jin Hyuga from Zettai Muteki Raijin-Oh, Rica is known nowadays as the voice actress for Satoshi/Ash in Pokémon, and has a tendency to ad-lib his catchphrase ("getto da ze") when playing other roles. Her roles are hotblooded enough to put Junko Takeuchi to shame, yet her range can be cute enough to rival Ikue Otani. She has several solo albums and was a founding member of supergroup JAM Project.

She has no relation to Marika Matsumoto, but they did work together once.

Rica has also performed songs in: