"A long time ago, on the mythical island of Okoto, all lived in harmony."
—Narrator, "The Legend" 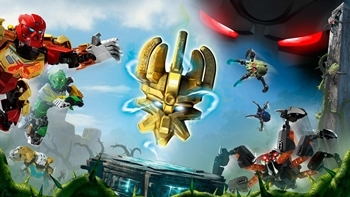 Only five years after the end of the popular BIONICLE franchise, LEGO's having another crack at it! Who'd have thought?

The story this time around starts off on the island of Okoto, a tropical paradise that was home to two brothers, revered crafters of elemental Masks of Power- Ekimu, wearer of the Mask of Creation, and Makuta, wearer of the Mask of Control. As in the original story, Makuta was.. less popular than his brother, and not at all happy about it, eventually deciding to craft a Mask of Ultimate Power to show Ekimu up. It promptly took over his mind and started to destroy the island, forcing Ekimu to sacrifice himself and cast the both of them into endless slumber. Their masks were lost, and Okoto's Protectors, fearing for the island, called down six Masters of the elements- the Toa- to gather their elemental masks and save the island.

As old-school fans of the original series should note, Bionicle 2015 takes heavy inspiration from the early years of its first run. The backstory is quite similar to that of 2001, easter eggs and shoutouts to various aspects of the first series abound, and even the Toa themselves, despite utilizing the CCBS (Character and Creature Building System) from the Hero Factory sets, were designed to be as similar as possible to their 2001 incarnations while still having their own identities- they even have gear functions and masks that can be knocked off.

The first series features the heroes questing to search for golden masks, which once again, give them elemental powers. Then they face off against an arc boss Lord of the Skull Spiders, which, giving that the actual battle lasted little over 2 minutes, is rather pathetic. (And according to the toy size, is a pushover for even one of 'em Toa)

Then, of course, they find Ekimu, the good mask maker, who tells them that yet another mask The Mask of Creation has been stolen by a follower of Makuta, and now they face off against a whole other team of Skull-themed villains who seem to like a one-on-one rivalry against the Toa.

While the series doesn't have an online game like the much-loved MNOLG of 2001 - commonly cited as the best experience the original series had to offer - there are several online animations detailing the continuing adventures of the Toa as they fight to save Okoto. The official website can be found here

In 2016, Netflix launched a four-episode CGI-animated show called LEGO: Bionicle: The Journey to One.

On July 29th, 2016, Lego announced that they were discontinuing Bionicle at the end of the year [1]