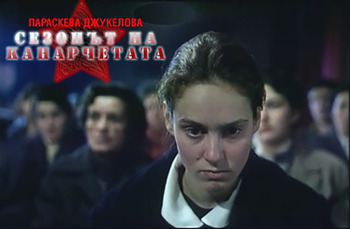 Canary Season (Сезонът на канарчетата) is a 1993 Bulgarian drama film telling the story of a single mother's struggle to carve out a life for herself and her son in communist Bulgaria.

Liliana "Lily" Krăsteva Tzvetkova awaits her son Malin's return from prison, where he spent half a year for beating up her lover to protect her. The young man is additionally troubled by his ex-girlfriend being taken by the local gang leader. He reunited with her, but the gang beats Malin up. Desperate for consolation, he confronts his mother about her lover and how she has left him, Malin, without a real father. While digging for money, he finds a series of old love letters to his mother, signed by one Slavcho. By way of coincidence, he remembers that he's seen the man at the youth correction school he was sent to, and goes to confront him, but Slavcho knows nothing about having a son with Lily. Malin then takes it to his mother, who is forced to finally sit down and tell him the tragic story of his conception and her plight to secure a decent living for both of them.

In Shabla, a coastal town in 1960s Bulgaria, Lily and her boyfriend Slavcho ("Slavi") are in their final year of high school. They are happily in love, but Lily is worried when Slavcho is about to be drafted into the army. Soon after, Lily's friend Tzetzka takes her to a café and introduces her to her boyfriend, Ivan Filipov who's the son of the local Communist party secretary and thus is the wealthiest, most influential and most flamboyant young man in town. Ivan is the resident bad boy, bully and womanizer, and Lily does not feel good in his company. On New Year's Eve, Lily goes to meet Tzetzka and go to the movies, but only Ivan is there. He lures Lily to his apartment and rapes her, leaving her to stagger back home as fireworks go off.

Since Ivan is virtually untouchable by the authorities, the best Lily's family can hope for is for the court to force him to marry her. This is indeed what happens, but since Lily would not have sex with him, Ivan starts bringing mistresses home. After she gives birth to Malin, she packs her things and goes to her parents' house, where Ivan's mother soon appears, exposing Slavcho's letters and using them as a reason to settle a divorce. Not long after Lily is taken to a women's concentration camp where she witnesses brutal torture. Lily decides to move away from Shabla and together with Malin takes a train to the capital, unsure of what to do next. Her adventures take her to the home of a wealthy elderly woman who takes her in, to a hospital where murders are being covered up, to a psychiatric ward, until she can finally secure a place to live for her and her son.