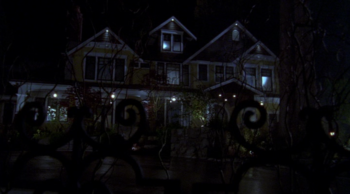 "Shawn, don't do this to me. You're late. As of this moment, you are officially late... just call me when you get here?"
Directed by Stephen Surjik
Written by Steve Franks
Advertisement:

Gus's boss (Todd Stashwick) forces him to choose between his pharmaceutical sales job and the Psych agency, so Shawn decides to save both jobs by investigating the home of the company's V.P. (Christopher McDonald), which appears to be haunted. In the meantime, Shawn must deal with the return of his mother Madeleine (Cybill Shepherd), a psychiatrist who is in town to evaluate some of Santa Barbara's finest, including Lassiter.