Recap / Buffy the Vampire Slayer S5E4 "Out of My Mind" 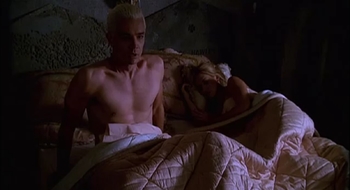 "Oh God, no. Please, no."
"I so don't want to deal with Spike right now. The guy is really starting to bug me in that special 'I want to shove something wooden through his heart' kind of way."
—Buffy Summers
Advertisement:

At the cemetery, Buffy stalks her vampire prey, killing several new vampires with a little unwanted help from both Riley and Spike. Riley demonstrates quite a bit of enthusiasm and new strength while fighting, while Buffy simply orders Spike to stay out of her way. As Buffy and Riley leave, Spike swears to taste Buffy's blood, but as he walks off, he falls into an open grave. Buffy and Willow argue over a topic from class and discuss Buffy's busy schedule.

Buffy arrives at the Magic Box to train and is pleasantly surprised to see that the back room has been transformed into an amazing training room. Harmony seeks Spike and his help because she is frightened that Buffy is out to kill her. The two conspire to kill the Slayer. While Joyce makes breakfast for Dawn, she briefly wonders who Dawn is before collapsing onto the floor.

At the hospital, an intern named Ben informs Buffy and Riley that Joyce will be fine, but that doctors aren't sure what caused her to collapse. Dawn is playing with a stethoscope and when she listens to Riley's heart, she finds that it is racing much faster than normal.

After listening to Riley's heart, a doctor recommends that he stay in the hospital to guard against the high risk of a heart attack, though Riley dismisses her concerns. Buffy tries to think of a way to help Riley and discusses the situation with Willow and Dawn. After noting her frustration that the government is likely spying on Riley, but when she needs to get a message to them she doesn't know to do it, Dawn suggests that if the government is listening then she needs to ask for help where she knows they'll hear it. Buffy has an idea and goes to Riley's place, picks up the telephone receiver and simply states that Riley needs help before replacing it.

Still part of the government, Graham tries to force Riley to see a doctor, but Riley is stronger than Graham and the other agents and gets away. After speaking with Graham later that day, Buffy takes it upon herself to get Riley to a doctor before he dies. Buffy gives Spike information about the doctor that can help Riley, hoping that the vampire could help find Riley and bring him there. Instead, Spike and Harmony go to the doctor and try to force him to remove the behavior-modification chip that prevents Spike from harming people.

Buffy finds Riley in the Initiative caves, punching into rock because he can't feel any pain. He tells her that he's afraid he won't be enough for her once he lets the doctors operate on him. After convincing Riley to get medical attention, Buffy brings him to the hospital and finds the doctor gone. Just after the doctor finishes sewing up Spike's skull, Buffy arrives with Riley and a fight ensues. As he tries to bite the Slayer, Spike finds that the doctor only pretended to remove the chip from his head. When Riley suffers a heart attack and collapses while fighting Harmony, Buffy immediately turns her attention to him. With Buffy distracted, an enraged Spike escapes with Harmony, ranting about his disgust with Buffy and his weariness with how she is seemingly the source of everything wrong with his life.

The doctor is able to operate successfully on Riley. Later, Graham talks with Riley and tells him he no longer has a purpose in Sunnydale—without the Initiative, he's nothing. Riley assures Graham he has Buffy, but Graham insists that'll never be enough.

Buffy shows up at Spike's crypt, ready to stake him. He's willing to let it happen, daring her to put him out of the misery of living in a world with her in it, being everywhere he turns, ruining everything he plans. She pauses, confused, stake raised, and then hesitates. They stare at each other for a moment, and then he pulls her into a passionate kiss. She pulls back, shocked, but then returns to the embrace. She tells Spike, "I want you," and he tells her, "I love you Buffy. I love you so much." Spike then awakens from his dream, horror-struck beside a still-sleeping Harmony, desperate to deny that his feelings for Buffy are anything but hate: "Oh God, no. Please, no."