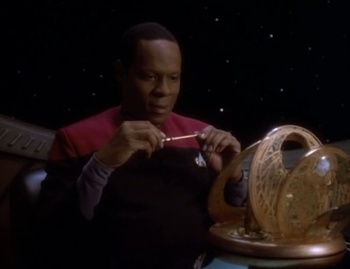 Sisko with his new IKEA clock.
It's pissed off Kira time. In this instance, she's fuming that a crew of Valerians have been permitted to dock at the station. Back during the occupation, the Valerians worked with Cardassia, supplying them weapons grade Dolamide. And she's convinced they're doing it again.
Advertisement:

Sisko tells her that without proof, she can't do anything about it. Before it goes any further, their attention turns to a Klingon ship returning through the wormhole. A month ahead of schedule. And it promptly explodes.

O'Brien manages to beam one Klingon, Hon'Tihl aboard. But he can't be saved. He speaks one word before he dies: "Victory."

Hon'Tihl's ship was on a simple bio-survey mission. Which makes the weapons burns on his body and his cry of "Victory" rather unusual. Needing to get to the bottom of things, Dax and O'Brien head off in search of the ships mission recorder.

Odo drops by Quark's for his usual round of blackmail-assisted info gathering. Quark mentions the crew, who trashed several holo-suite rooms by the way, spoke of something that would "make the enemies of the Klingon Empire tremble." That's all he has.

As Odo leaves, he's racked by a mysterious force. His head morphs oddly as if it's shape-shifting of its own accord, and nearly splits in two before returning to normal, and so Quark goes hurrying off to find Bashir.

Awakening in sickbay, Odo appears no worse for wear. Which is good, because Bashir has zero clue about how his body works. He prepares to leave, only to be stopped by Bashir, who starts talking tough in a manner that is very out of character, and questioning Odo about an "Uneasy alliance" aboard DS9.

Bashir isn't the only one acting funny. Dax has gone spacey, randomly recounting old stories out of the blue. Kira has become a vicious conniver, looking to topple Sisko and O'Brien. Sisko has become an aloof and paranoid man, with O'Brien as his threatening right hand man.

With the mission recorder recovered, O'Brien sets to work decrypting the journal logs, while Sisko holes up in his room building a clock.

Odo is finally forced into action when Quark comes shuffling into his office, stuck in a neck-brace. While tending the bar, he overheard Kira trying to sway Dax onto her side in an attempted coup. Prompting Kira to threaten him into silence, and toss him like a ragdoll.

Examining the logs, Odo finds out the Klingon ship was destroyed from within. The crew was possessed by an extinct race known as the Saltah'na when they stumbled upon their mysterious energy spheres. The Saltah'na wound up destroying themselves in an internal conflict. And they've picked up right where they've left off in new bodies.

Working with Bashir to find a solution, Kira makes her coup attempt. It fails, and Sisko and O'Brien try beaming onto the Valerian ship. It's a no-go, and they only get transported into a corridor.

Odo is playing both sides of the conflict, herding all the possessed people into a cargo bay. With a specially designed program, he expels the Saltah'na from the crew, and jettisons it out the nearest airlock.

With that, things resume as normal aboard the station and Sisko finishes his clock, placing it as a permanent fixture in his office.