Western Animation / Barbie & Her Sisters in a Pony Tale 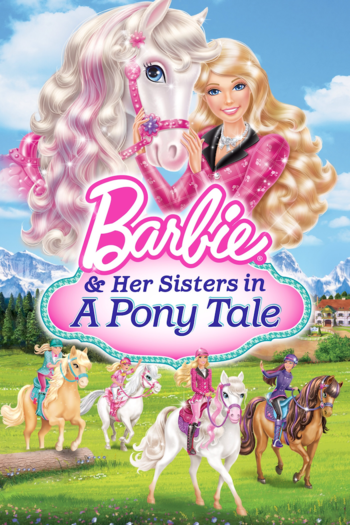 Released in October 2013, the 26th movie in the Barbie series, and the first to actually give subplots to the Roberts sisters. Also, while this movie does feature Barbie's sisters like in A Perfect Christmas, A Pony Tale follows an entirely different continuity.
Advertisement:

Barbie and her sisters (Skipper, Stacie and Chelsea) are spending part of the summer visiting their Aunt Marlene and her two kids, Max (Marlene's son) and Marie (Marlene's daughter), who live in the Swiss Alps (not too far from the Matterhorn)—Marlene runs a horsebreeding ranch/equestrian school called "Alpine Academy," and her nieces (minus Skipper, who's more interested in her iPad) are excited for their month-long horseback riding vacation. Barbie, the most experienced rider of the Roberts-sisters (to the point of being considered "the best rider on the West Coast" back in America), is allowed to pick her own horse while Stacie and Chelsea, both of whom are beginners, have to let the horses choose them—Stacie's chosen by a horse named Pepper while Chelsea's chosen by a pony named Dash.

Unfortunately, Skipper eventually learns from Marlene that Alpine Academy is in a lot of financial trouble, and if things don't improve, she'll have to sell the place to Bridget Cheynet, the owner of Alpine Academy's biggest rival, École Montagne. Skipper comes up with the idea of her and her sisters competing in the upcoming Inter-Academy Equestrian Tournament (which is going to be hosted at Alpine Academy) in an attempt to win it and keep Alpine Academy.

Matters are complicated when Barbie finds a member of the legendary herd of Majestique-horses and unwittingly leads the bad guys right to them.

If you love something, set it free.
— Barbie