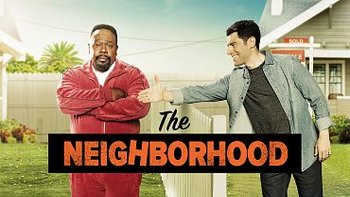 The Neighborhood is a 2018 Comedy series about a white guy, Dave (Max Greenfield), who moves along with his wife Gemma (Beth Behrs) and elementary-school aged son Grover (Hank Greenspan) into a neighborhood populated with mostly black people. Calvin Butler (Cedric the Entertainer), his next door neighbor, finds him annoying, and tries to avoid him at all costs. Calvin's wife Tina (Tichina Arnold) on the other hand wants to get along with them and is nice to them. A lot of the episodes revolve around Dave trying to be friendly with Calvin.

Welcome to the Tropes: