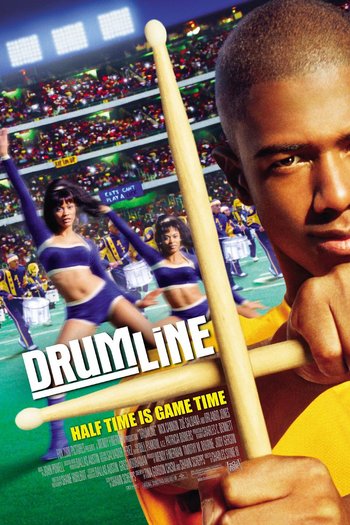 "One band. One Sound."
Advertisement:

Devon Miles (Cannon) is a talented, but cocky freshman drummer for the marching band at the fictional college Atlanta A&T. Devon is recruited by band director Dr. Lee who sees his talent while scouting. His self important attitude puts him at odds with upperclassman and section leader Sean Taylor. The band director, Dr. Lee (Jones), struggles with whether Devon's talent outweighs the damage his behavior brings to the band.

A made-for-TV sequel called Drumline: A New Beat was released in 2014, starring Alexandra Shipp as Dani Bolton, a full of herself drummer attending A&T. Leonard Roberts reprised his role of Sean Taylor as the new band director at A&T. Nick Cannon also returned.