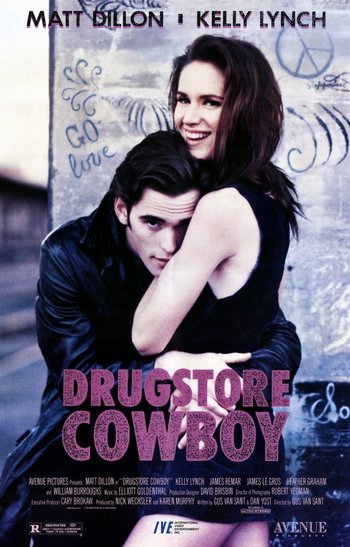 "Well, to begin with, nobody, and I mean nobody, can talk a junkie out of using. You can talk to 'em for years but sooner or later they're gonna get ahold of something. Maybe it's not dope. Maybe it's booze, maybe it's glue, maybe it's gasoline. Maybe it's a gunshot to the head. But something. Something to relieve the pressures of their everyday life, like having to tie their shoes."
Advertisement:

Drugstore Cowboy is a 1989 film directed by Gus Van Sant and based on the book by James Fogle.

The film is set in Portland in 1971. Bob (Matt Dillon) is a dope addict and the head of a little gang of dope addicts that includes his wife Dianne (Kelly Lynch), Bob's buddy Rick (James LeGros), and Rick's girlfriend Nadine (19-year-old Heather Graham in her Star-Making Role). Bob specializes in robbing drugstores. Sometimes they create a distraction in which Annie fakes a seizure in the front of the pharmacy while Bob ransacks the pill drawers. Sometimes they simply climb through open windows.

Bob's little gang is closely monitored by an anti-drug unit led by a cop named Gentry (James Remar). One day Bob pulls a prank on a police surveillance team that winds up getting a cop shot. The gang decides to leave town for a while, which provides them with a chance to execute one of Bob's pet ideas, namely, robbing a hospital. Things go awry.

William S. Burroughs pops up near the end as Tom, another drug addict living in the same flophouse hotel as Bob.