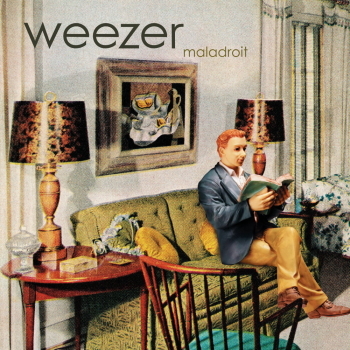 Debt on my head, wasting time on my own...
Advertisement:

Maladroit is the fourth studio album by Alternative Rock band Weezer, released in 2002. Following the successful release of Weezer (The Green Album), frontman Rivers Cuomo got cocky. He fired the band's manager, arranged for the band to self-fund their next album, and got to work on new material. Though initially seeking outside producers, the band made the decision to once again self-produce. Like their last self-produced effort, this resulted in a much heavier sound than its predecesor.

Notably, Rivers sought to involve the fans into the recording process. He would release demos and works in progress to the band's official website and would communicate with fans directly through an online forum called the Rivers Correspondent Board seeking input for the album. Unfortunately, this innovative approach to album production failed miserably, as Rivers would argue with his fans over what direction to take the album. In an incident infamous in the Weezer fandom, he called Weezer (The Blue Album)'s closing track "Only in Dreams" "GAY!GAY!GAY! DISNEYGAY! [sic]" in a thread comparing the Maladroit demos to the aformentioned Blue Album track. That isn't to say that it was a total waste of time, as some fan input did make it onto the final product: popular Green Album reject "Slob" was revived for the album by popular demand, and the album name was suggested by a forum member.

Meanwhile, Green Album bassist Mikey Welsh's mental health began rapidly deteriating following the Green Album sessions. He failed to appear at several shows and even the shooting for the music video of "Island in the Sun". It turns out that Mikey had a nervous breakdown and attempted suicide. He was checked into a mental hospital in August of 2001. Weezer was forced to replace him with bassist Scott Shriner, whose first appearance was on this album and remained with the band ever since. Mikey Welsh has since retired from music to pursue a career in art. He tragically died of a drug overdose in October 2011.

Maladroit was recorded through December 2001 to January 2002 at Cello Studios behind their label Geffen's back. They only found out about the new album when they began hearing the lead single, "Dope Nose", on the radio, after Rivers personally mailed radio stations a copy of the song. Geffen was furious, and demanded that the band would turn over the master tapes and issue an apology to stations who played the song, to which Weezer refused.

Due to the head start that "Dope Nose" was given, it proved to be yet another successful single for the band. An additional single, "Keep Fishin'", was released in September of 2002 with a music video featuring The Muppets (yes, THE Muppets).

Maladroit was the first Weezer album to be released on the Enhanced CD format, allowing the CD to also house bonus videos to be accessed with a computer equipped with a CD drive alongside the album.

Despite the strong sales of its two singles and its #3 spot on the Billboard 200, the album underperformed, selling a paltry 605,000 units as of 2007, not as terribly as Pinkerton when it first came out, but a far cry from the much more successful Green Album.

Cheese smells so good on a burnt piece of tropes: