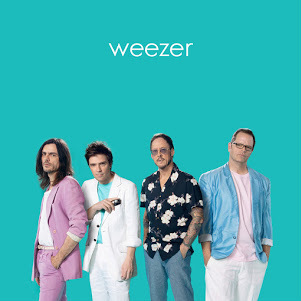 Weezer (The Teal Album) is a 2019 Cover Album by Weezer known for the version of Toto's "Africa." But why did this happen, you ask? Well in late 2017, a Twitter account called "@weezerafrica" was made and it's only purpose was forcing Weezer to cover "Africa". After alot of days passed, Weezer finally made a cover of "Africa" in May 29, 2018... and then in January 24, 2019, something unexpected happened... Weezer released a Cover Album. The album has mixed receptions because of it, some people liked it because it was lighthearted and fun, other people disliked it because for the same reason, because it postponed Weezer's Black Album (which was supposed to be "more darker than the White Album").

"I bless the tropes down in Africa":