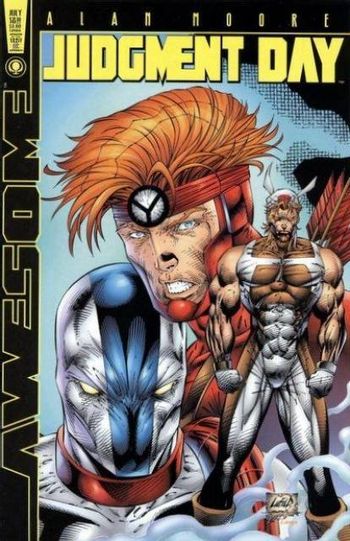 Once upon a time, there was a man called Rob Liefeld. Near the end of The Dark Age of Comic Books, his comics began to sell poorly. And there was another man — Alan Moore. He felt guilty, because a couple of his comics drastically changed the industry, when everybody wanted to do something like him, thus creating the Dark Age. Those two men met and saw great opportunity with each other. Everything with Moore's name on it was selling, so Liefeld could save his company by hiring him. On the other hand all of Liefeld's heroes were copies of DC/Marvel characters or teams, and Moore got an idea how to use them to appeal to classic comics fans. A deal was struck, with Liefeld basically giving Moore a carte blanche to do whatever he wanted creatively. At first, they started slowly; Moore got Supreme and turned him into a living love letter to the Silver Age Superman. It worked, so Moore got his hands on all Liefeld's characters. And this is when this story comes to life.

Youngblood: Judgment Day is a 3-issue miniseries (plus Aftermath one-shot) written by Moore and drawn by Liefeld and various other artists. Youngblood team member, Riptide, has been murdered and her fellow teammate, Knightsabre is the main suspect. Because the authorities don't want anything to do with it and it's the first case like that in history, they left the superhero community to handle this, with superheroes as the jury, courtroom, defense, prosecution and judge familiar with the community. But it's all only the beginning of a far greater tale, one older than our world.