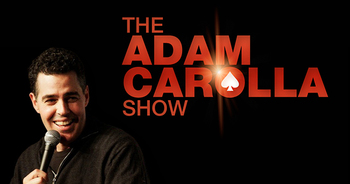 The most downloaded podcast in the world, formerly a radio show on KLSX in LA from 2006 to 2009. The star of the show is day laborer-turned-comedian Adam "Lakers" Carolla, "Bald" Bryan Bishop on sound effects, and news girl Gina Grad (previously Teresa Strasser and Alison Rosen).

The show's typically starts off with Adam discussing whatever has caught in his craw that day. This includes current events but also complaining about Los Angeles (traffic, stupid laws, etc) and various minor aggravations of his that he can turn into hour-long rants (see Berserk Button below). Then usually a guest(s) will come or call in and Adam will interview them. Regulars include Matt Achity (Rotten Tomatoes owner), David Wild, a music journalist, and several fan-favorite comedians like David Alan Grier, Jo Koy, and Deaf Frat Guy. The show ends with the news segment, which may get through several news stories or just one, depending how much Adam riffs on each item.

Other recurring bits include:

The show goes on the road and the live shows are similar, but include more fan interaction.

ACS is part of the Carolla Digital network, which has a massive arsenal of podcasts. Adam additionally co-hosts The Adam and Dr. Drew Show (a revival of sorts from their days together on Love Line) and Ace on the House with his old buddy Ray (or Ace on the Roof, if you prefer), and Take A Knee, which features one-on-one interviews. Adam's wife Lynette also has a podcast on the network (all about Bruce Springsteen).

"Until next time, for David Alan Grier, Alison Rosen and Bald Bryan, this is Adam Carolla saying Mahalo!"