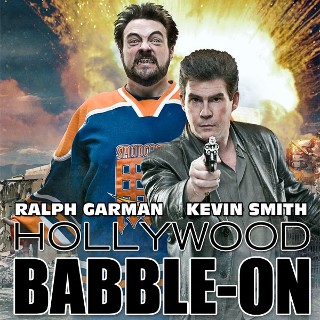 Hollywood Babble-On is one of the many podcasts run under the SModcast banner, hosted by actor/DJ Ralph Garman and director Kevin Smith.

The show was recorded at Smith's SModCastle theater for the first several shows before moving to the Jon Lovitz Podcast Theatre (formerly the Jon Lovitz Comedy Club) on Universal City Walk at Universal Studios Hollywood, and then the Hollywood Improv after Smith/Garman and Lovitz had a falling out.

The show focuses on Hollywood and celebrity news. Since its inception in August 2010, the show has picked up numerous suggestions and submissions from listeners to become recurring segments and motifs in the show. Segments include:

Since Kevin has numerous other podcasts to host, the show has had several guest hosts, including Jon Lovitz, owner of the Podcast Theater.

You can listen to Hollywood Babble-On here

, on Stitcher Radio, or on iTunes; New episodes appear every Monday. They had been signed to make a pilot for a TV version of the show for AMC, but the plans were scrapped when AMC decided to do away with many of their non scripted programming. Ironically, as Ralph noted when telling the audience the news, Kevin Smith's Comic Book Men was one of the two shows, along with Talking Dead, that survived.