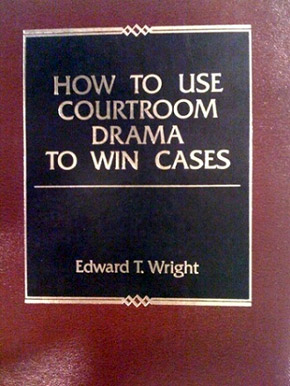 Perhaps the ancestor of another Wright?note  This is a real book

The case is going against the defendant when suddenly, the defense attorney starts making penguin noises, discussing his sex life with The Judge, pulling vegetables out from under the defendant's chair, or calls the witness's pet parrot to the stand to testify. As zany stunt upon zany stunt piles up, expect the prosecution to be shocked speechless and The Honorable J. Gavelbanger to be utterly powerless to calm the proceedings or even hold people in contempt of court as the behavior of everyone quickly reaches levels that would embarrass even Judge Judy.

The more desperate the case, the more likely the defense attorney uses such antics.

Perhaps he's stalling for time while an associate tries to find the evidence that will show who the real killer is, or maybe he's finally just flipped under the strain of the case.

Either way, expect him to be allowed to go on making a mockery of the legal system for far longer than any reasonable Judge in Real Life would allow without having him jailed for contempt. To say nothing of the high chance he would be severely disciplined if not disbarred as soon as the nearest Bar Association ethics panel heard about it. Expect the Stern Old Judge to tell them they're "on thin ice" and "looking at contempt" if they don't get to the point.

Often, this antic will result in a Penultimate Outburst.