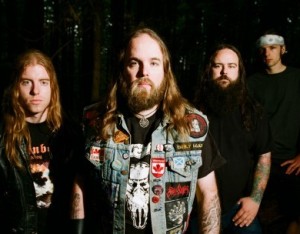 ENEMIES OF METAL, YOUR DEATH IS OUR REWARD!
3 Inches of Blood was a thrash/Power Metal band from Vancouver, British Columbia, Canada formed in 1999. Their style is inspired by the New Wave of British Heavy Metal and more modern death and black metal bands, which is mostly shown through vocalist Cam Pipes's Halford-esque singing style and former vocalist Jamie Hooper's screams and growls. On their first two albums, the NWOBHM influence is seen far more than the death metal influence, but their third release, Fire Up the Blades, shows far more of the death metal influence and was described to be inspired by "low quality beer, bong hits and listening to black metal in the dark." Here Awaits Thy Doom returned to the NWOBHM influenced style.
Advertisement:

They were often accused of being a joke band, though the band disagreed. While they acknowledged that they were ridiculously over the top, they did not consider themselves to be a joke band.

On June 2, 2015, the band has announced their disbanding and that their final performance will be in Vancouver on November 7, 2015. Ash Pearson has also joined Revocation as their new full-time drummer, which may have had something to do with the breakup; the future plans for Pipes, Hagberg, and Clark are unknown.