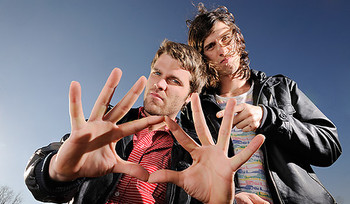 3OH!3 (pronounced "three oh three") is an American electronic music duo from Boulder, Colorado, made up of Sean Foreman and Nathaniel Motte. They are best known for hit singles such as "Don't Trust Me," a remix of "Starstrukk" featuring Katy Perry, and "My First Kiss" featuring Kesha.

As noted on This Very Wiki, 3OH!3 are not actually particularly crunk or core. Despite this, they were regarded as poster boys for Crunkcore, also known as scrunk. Warped Tour co-creator and CEO Kevin Lyman described the group as "the real tipping point for scrunk" back in 2009. Lyman noted that, though 3OH!3 doesn't incorporate the blood-curdling screams of many scrunk acts, they were the first emo-influenced act to depart from traditional instruments in favor of pre-programmed beats while still retaining many of the stylistic elements of emo.