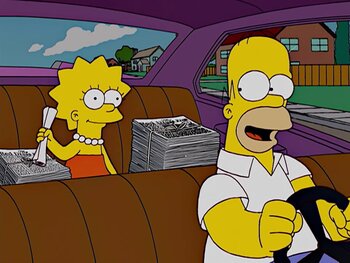 Lisa prepares to read a poetic tribute to Geezer Rock, a rock formation outside Springfield resembling an old man in a mountain, in honor of its anniversary. When Homer attempts to remove a tree in one of Geezer Rock's "eyes", he causes it to collapse, interrupting Lisa's performance. Lisa finds an outlet for her poem through her homemade newspaper The Red Dress Press.

In the meantime, the rocks collapsing overcome and seemingly kill Mr. Burns. He survives and is appalled to find that the Springfield populace shows more sadness over Geezer Rock's destruction than his apparent death. Mr. Burns then buys every media outlet in Springfield-including the skywriters-and begins seeding the media with pro-Burns and pro-nuclear power propaganda. Angered by Burns' overtaking, Lisa organizes a news crew to manage The Red Dress Press and encourages the populace to think against the overflow of Burns propaganda. Naturally, Burns declares war in various ways (having goons attack their car, cutting off the power to the Simpsons house, and ruining Lisa's reputation). Touched by his daughter's determination, Homer composes an article in his own homemade paper The Homer Times praising Lisa for her effort. Various Springfield residents print their own newspapers to get their own voices out there, encouraged by Lisa's actions. Mr. Burns stops his media takeover, but rather than admit defeat, he and his Ambiguously Gay assistant, Smithers, go on a shopping spree.