Series / 10 Things I Hate About You 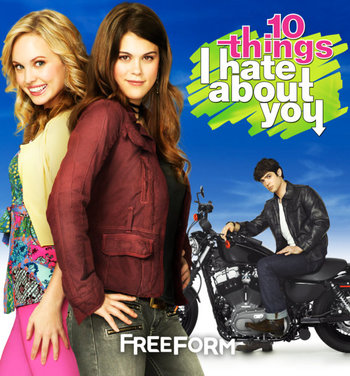 10 Things I Hate About You is a 2009 American Teen Drama created by Carter Covington and broadcast on ABC Family (later Freeform) based on the 1999 film of the same name.

The Stratford sisters have just moved in from Ohio to California and are about to start their new year at school. But while the younger sister Bianca (Meaghan Martin) wants to try her best to stand out and be popular, her older sister Kat (Lindsey Shaw) is a cool, smart, strong-willed, forthright feminist who is looking to better the world and get out of school as fast as she can. When Kat meets the intense Patrick Verona (Ethan Peck), sparks begin to fly.

As they start a bumpy year at Padua High, Kat and Bianca attempt to navigate the popular crowd, boys and their Over Protective Dad Walter (Larry Miller). Bianca tries everything to be popular and become a cheerleader – although getting involved with Joey (Chris Zylka) the boyfriend of the most popular girl in school Chastity (Dana Davis) creates new challenges.

The series only lasted two years before it was Cut Short. Despite that it amassed an impressive fanbase and was generally considered better than expected for a series recycled from a film.