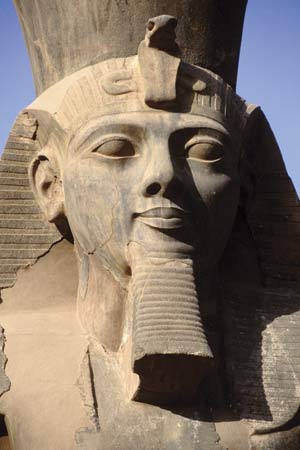 The man in gauze!
My name is Ozymandias, king of kings:
Look on my works, ye Mighty, and despair!
—Percy Bysshe Shelley, "Ozymandias" (that title being the Ancient Greek name for Ramses II)
Advertisement:

Also known as Ramses the Great, Ramses II (1303 BC — 1213 BC) is popularly considered the greatest and most famous of all Ancient Egyptian pharaohs. To modern Egyptians, he's a national hero - sort of the equivalent of King Arthur, part real man and part legend - whereas to the rest of the world he is best known for his portrayal as the Pharaoh of the Exodus. Believers actually claim that it's more likely that one of the pharaohs of the earlier Eighteenth Dynasty (the one with Thutmose, Hatshepsut, Akhenaten, and Tutankhamun) was the one in Exodus. (Ramses himself was the third monarch of the Nineteenth Dynasty.) However, Egyptian rule in Canaan continued throughout that time and through his entire reign, making a founding of Israel unlikely at that time. One of the few clues in the Bible as to the time of the Exodus is that the Hebrews laboured to build the cities of Pithom and Pi Ramses, which are now known to have been constructed or greatly expanded in his reign. Also, the first mention of Israel outside of the Bible occurs in a record made sometime after his death, during his son's period on the throne, which indicates possible involvement.

Although he has often been accused of exaggerating his own achievements, Ramses remains one of the most powerful figures of ancient history. He was a courageous warrior, indefatigable ladies' man, builder of enormous temples (some of them dedicated to himself), and is notorious for being one of the two kings to sign the first peace treaty between superpowers in all of recorded history.

Notably, Ramses is one of a handful of pharaohs to be commonly known worldwide, along with Tutankhamun and Cleopatra VII. In 1976, when Ramses' mummy was brought to France for restoration, he was issued a passport noting his status and received a king's welcome. Contemporary records indicate that he had feared being forgotten after his death, and sought to make himself known to the future.note He had good reason to fear this; Egyptian pharaohs already had a centuries-long history of chiseling off the names of their predecessors' monuments and claiming them for themselves. He carefully designed his monuments and the carvings of his royal steles in such a way that removing his name would be difficult. By all accounts, he succeeded.