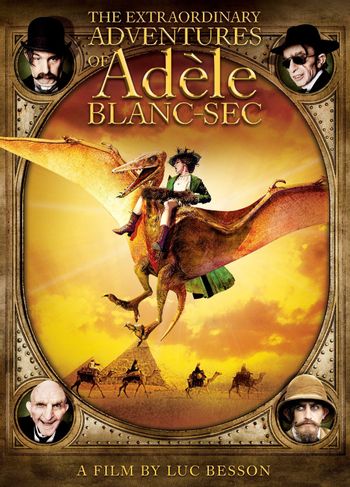 Adèle and the Secret of the Mummy ("Les aventures extraordinaires d'Adèle Blanc-Sec") is a 2010 Luc Besson movie starring based on Jacques Tardi's comic series of the same name. It stars Louise Bourgoin as the titular heroine Adèle Blanc-Sec and Mathieu Amalric as her nemesis Dieuleveult.

Set in the late Belle Epoque with steampunk elements, the movie centers on Adèle's quest to retrieve and revive a mummified egytpian medic to be revived by oddball supernaturalist Espérandieu in order to cure her catatonic sister. By the time she gets back from Egypt, Espérandieu has gotten himself into trouble by resurrecting a petrified pterodactyl egg...

Adèle and the Secret of the Mummy provides examples of: