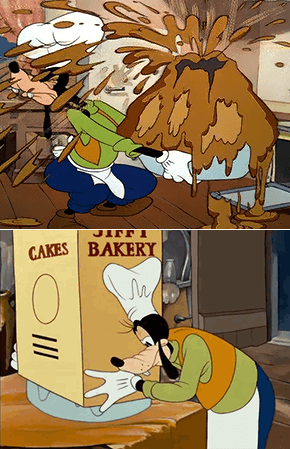 "Oh egads, my roast is ruined! But what if... I were to purchase fast food and disguise it as my own cooking?"
— Principal Skinner, The Simpsons, "22 Short Films About Springfield"
Advertisement:

So you have plans for supper. Problem is, nothing's going right. Either the oven's broken, the food is frozen or inedible, no pans are available, and/or you're pressed for time. No need to fear; there's always at least one restaurant nearby to resolve this plight so no one goes hungry! There are two types: openly taking guests to the restaurant or discreetly buying the restaurant food and serving it on your own plates, to trick the guests.

This is not uncommon for Real Life families to do this when dinner plans don't go the way they should, making this Truth in Television.

May be used as an alternative for a Masochist's Meal. Compare Convenience Store Gift Shopping, which can involve gifts bought when pressed for time. See also Peking Duck Christmas.