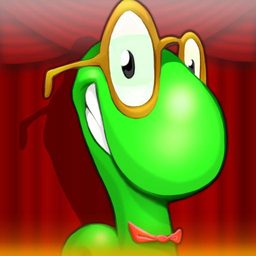 Bookworm is a word puzzle game released in 2003 by PopCap Games. The object of the game is to feed Lex the Bookworm by creating words with adjacent tiles on a board, which gives you points based on the length and which letters not unlike Scrabble. Making small and/or low scoring words causes flaming tiles to appear which if left unused will eventually destroy the board and end the game while making large words causes special, high scoring tiles to appear. It has been released on several platforms (each version varying in small ways) throughout the years with the latest release on the Nintendo 3DS (2011) and was successful enough to get a Spiritual Successor with Bookworm Adventures.

Tropes found in Bookworm include: