All the colorful animals and characters that have befriended DK and his crew.

open/close all folders
Animal Friends
Rideable animals that serve as Power Ups for the Kongs, offering a variety of abilities that can help players out in clearing levels or finding secrets.

Tropes associated with all Animal Friends 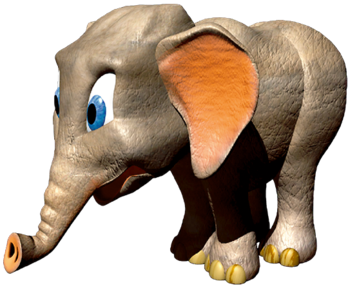 Introduced in Donkey Kong Country 3, Ellie is an elephant with the ability to stomp on enemies, pick up and chuck barrels at enemies, and fill her trunk with water which she can then shoot at enemies. 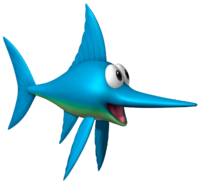 A cheerful-looking swordfish, Enguarde gives his rider improved speed and mobility underwater and the ability to spear enemies with his large bill. 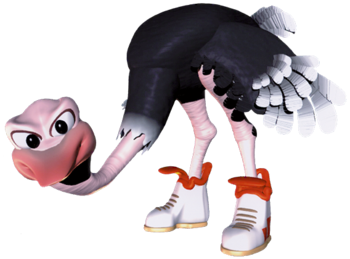 An ostrich with the abilities to jump far, run fast, and fly for a small period of time. Along with Winky, he is one of Cranky's favourite Animal Friends. Also notable for being the only Animal Friend apart from Rambi to appear in the first Donkey Kong Land game. 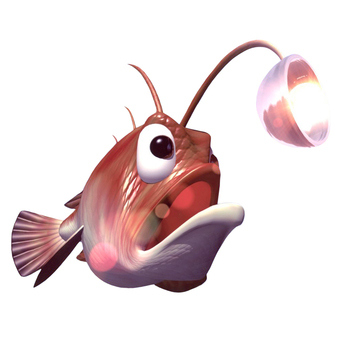 An anglerfish that helps Diddy and Dixie Kong by providing light in dark areas, thanks to his lure. He, unlike other animal friends, cannot be hurt. Glimmer was also seen in the trailer to Donkey Kong Racing, but it is unknown if he was going to be rideable.

A small bird that always flies perfectly parallel above the Kongs. Parry can collect items and kill Booty Birds (fat birds that hide treasure), but anything else will kill him. If you manage to reach the "No Animal Sign", you usually get rewarded with several extra lives or even a Bonus Barrel. 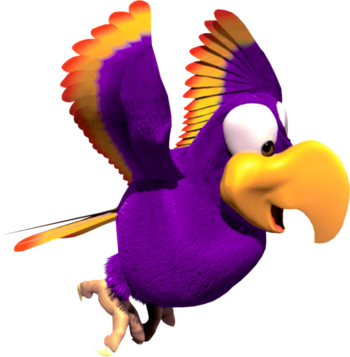 A purple parrot, appearing in DKC2 and DKC3. In the former, he could only fly downwards slowly like a "parrot-chute", but in the latter, he gained the abilities to fly in the same way as Squawks and to lift barrels. He made his grand return a decade later, in Donkey Kong: Barrel Blast, where his name was finally revealed.

A rhinoceros with attitude and a need for speed. The most iconic Animal Friend, Rambi has appeared in almost all of the DKC games (with the noticeable exception of Donkey Kong Country 3: Dixie Kong's Double Trouble!). He grants his rider increased speed, near-invincibility to enemies (as long as they don't come from above or behind), the power to break through walls, and the ability to traverse some dangerous terrain. 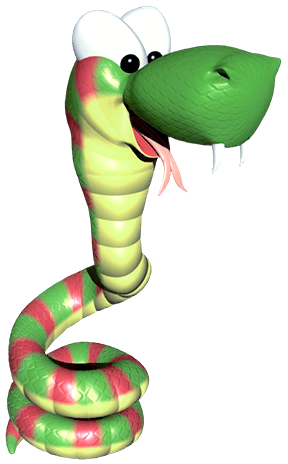 A coiled-up, goofy looking green snake with the ability to jump high. 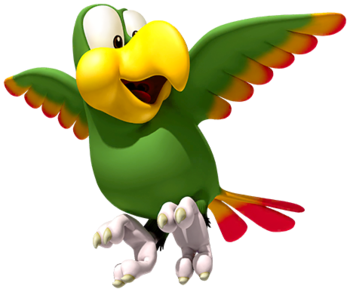 The most commonly recurring Animal Friend, Squawks is a green parrot that lives with Cranky Kong. Unlike the other Animal Friends, Squawks has had a different use in many of the games he's appeared in. In DKC, he carried a lantern to light up a dark cavern; in DKC2 and DKC3, he actually carried the Kongs and spat eggs at enemies; in DK64 he told the story, gave tutorials, found golden bananas and magic barrels for the Kongs, and carried a flashlight; and in DKCR and Tropical Freeze, he helps the Kongs locate hidden puzzle pieces. 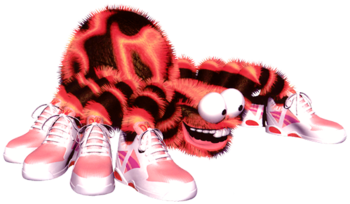 A giant, fuzzy spider with cool sneakers and the ability to fire webs, as either projectiles or platforms. 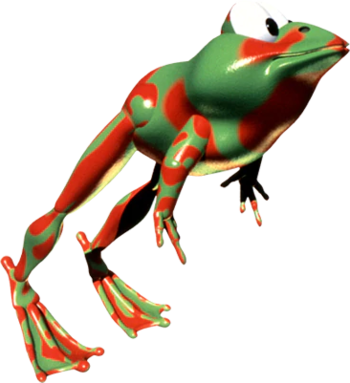 A frog with the ability to jump high, appearing in the first game and the first game alone (although he makes a cameo in DKC2, in Cranky's Monkey Museum). He and Expresso are Cranky's favourite Animal Friends. (Coincidentally, Expresso got a cameo in a Banjo game as well.) 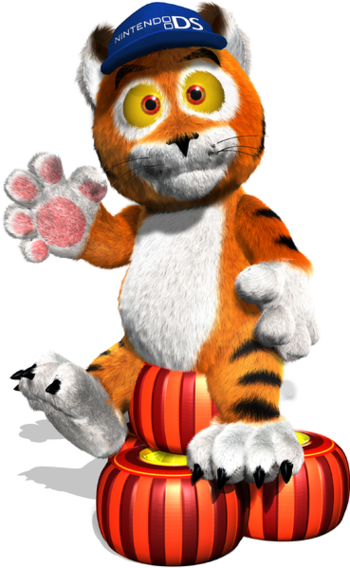 An anthropomorphic preteen tiger who lives on a tropical island (presumably not far from DK Isle). When his parents went on vacation, Timber's island was invaded by the evil super-Jerkass sorcerer Wizpig, so he called on Diddy Kong and a bunch of other friends (including Banjo and Conker) to help rescue the island. 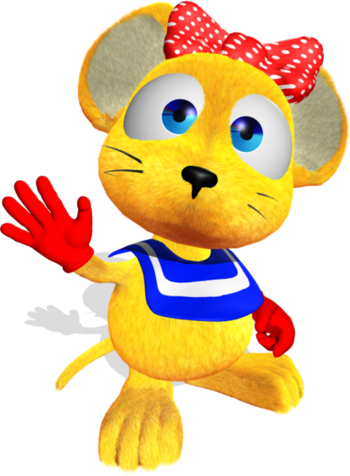 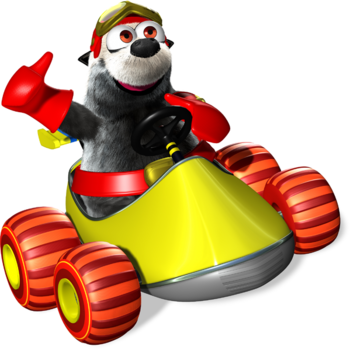 A badger and friend of Timber. 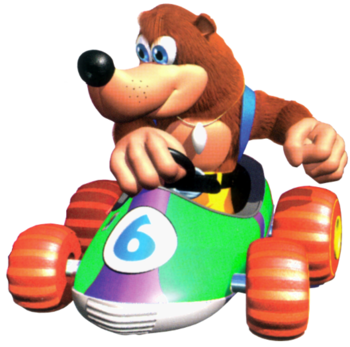 Come on, you know who he is. A lazy, but adventurous brown bear who hails from Spiral Mountain and co-protagonist of his own video game series. Read more about him here. 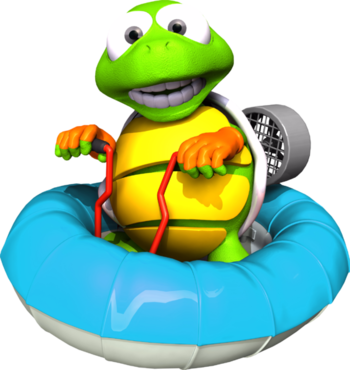 A very clumsy turtle. Has made occasional appearances in Banjo-Kazooie games. Despite this, he was allowed to return in the DS remake, unlike Banjo and Conker. 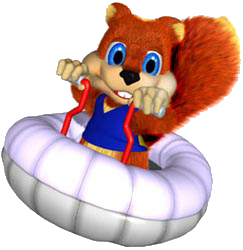 You probably know this guy as well. A hyperactive squirrel who later became far raunchier. You can read more about him here. 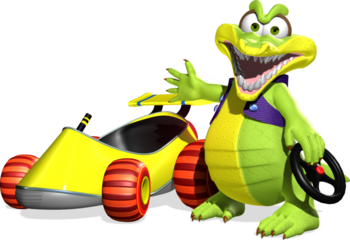 A crocodilian spy of K. Rool sent to monitor Diddy and his pals, although he ends up befriending them for real. 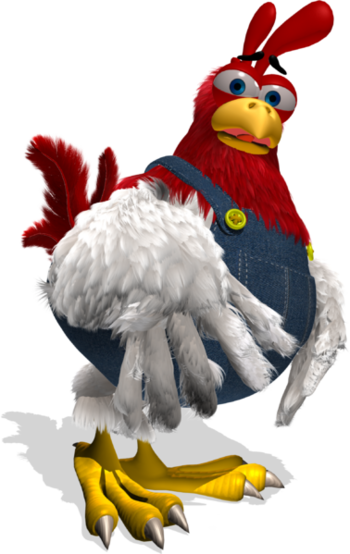 An anthropomorphic rooster who was the first to challenge Wizpig, but then he lost and ended up going missing. 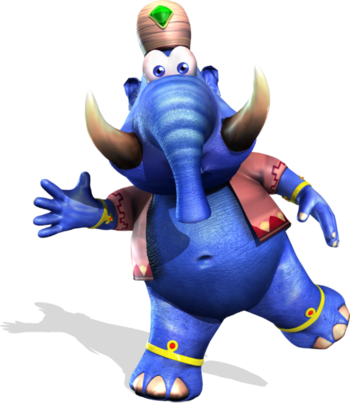 An elephant genie who guides the player in the game's Adventure Mode. 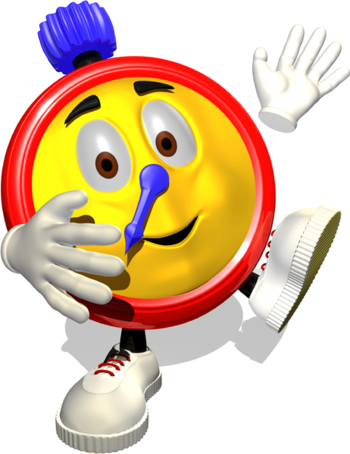 An anthropomorphic stopwatch. He allows players to view their scores and totals in each world. He's also an unlockable racer.

"Mr. Video Game" himself, the hero of the Mushroom Kingdom first earned his stripes rescuing his then-girlfriend Pauline from the rampaging Donkey Kong. Mario and DK have clashed several times since then, most notably when Mario flew off the handle in Donkey Kong Jr. and locked DK up, forcing his son to rescue him. Read more about Mario in his own character sheet. 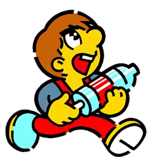 A human bug-exterminator. Stanley fought against Donkey Kong note technically Cranky Kong in Donkey Kong 3, but the big ape had it coming — DK invaded a greenhouse and got the local bugs all riled up, so Stanley had to go in there and perform some pest control. Stanley originally appeared in the Game & Watch game Greenhouse before his brief trip to the NES, and had a handful more G&W appearances afterwards, as well as a vaguely DK3-themed episode of the Saturday Supercade Donkey Kong cartoon. 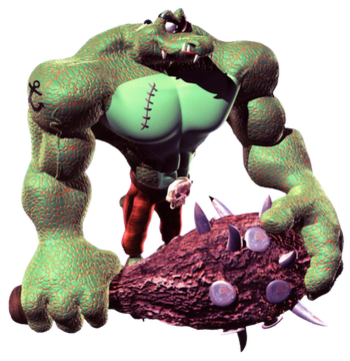 A large, muscular Kremling who lives in a kiosk at Crocodile Isle and guards the entrance to the Lost World, the true final area in the game. He secretly hates K. Rool and will allow the Kongs to use his golden warping barrel should they meet his generous fee of 15 Kremkoins per world. 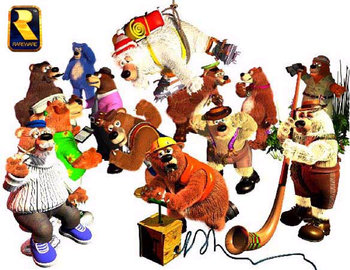 As they appeared in the SNES version.
Brash voiced by: Chris Sutherland (SNES version)

A family of bears scattered all over the Northern Kremisphere in Donkey Kong Country 3: Dixie Kong's Double Trouble!. There's at least one bear per level, as well as several who can be visited in the overworld. Talking to the bears and sometimes solving their problems will unlock the way toward Banana Bird caves, or free a Banana Bird entirely. The bears are Bazaar, Barnacle, Brash, Blunder, Bramble, Blue, Bazooka, Blizzard, Barter, Benny, Björn, Baffle, Boomer, and in the GBA remake, Bachelor. In Donkey Kong Land III, a generic bear runs the Sheepy Shop where you can play a memory game for life balloons and teleport between levels. 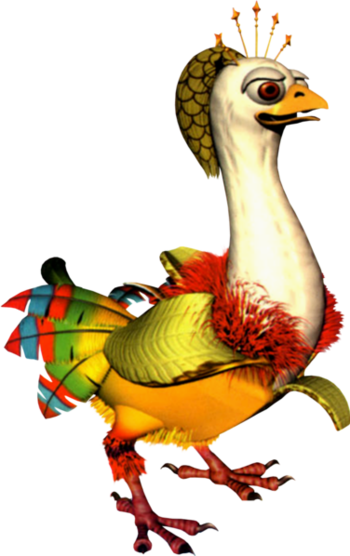 The huge ruler of the Banana Birds Dixie and Kiddy collect through the game. She was sealed away by K. Rool at some point and setting her free leads to the game's true ending. 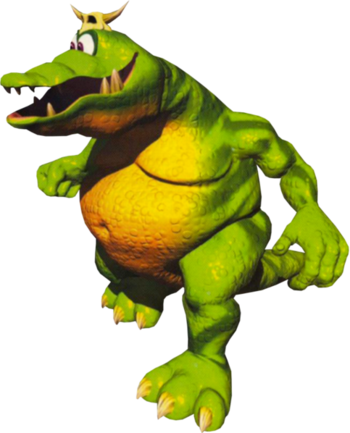 A giant Kremling that appears in Donkey Kong 64. K. Rool wanted him to crush Kong Isle under his colossal feet, but K. Lumsy refused, and was imprisoned. K. Rool then gave the keys to K. Lumsy's cage to the game's bosses. Every time the Kongs undo a lock, K. Lumsy does a dance of joy, which causes tremors that open the way to the next level.

"This isn't a joke, Kong! I NEED those blueprints, and so do you!"
Debut: Donkey Kong 64

A weasel of questionable honor who appears in Donkey Kong 64. Snide was a former member of the Kremling Krew and their chief engineer, but K. Rool got paranoid and suspected Snide of working against him, so he kicked the weasel out. Snide created the Blast-O-Matic superweapon that the Kremlings intended to use to destroy DK Isle; as his revenge, he helped the Kongs by giving them back some of the Golden Bananas K. Rool stole from them, as well as by holding off the Blast-O-Matic's firing sequence so that the Kongs could disable it. 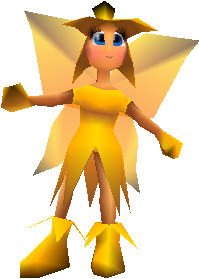 An anthropomorphic pig introduced in Donkey Kong Country Returns, he assists Donkey and Diddy in their quest by dispensing advice, acting as a midway point, and by summoning Super Kong if they fail one too many times in a level. 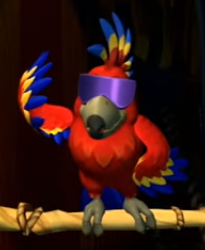 A red parrot with sunglasses who tends to Funky's Fly 'n' Buy during Funky Mode.