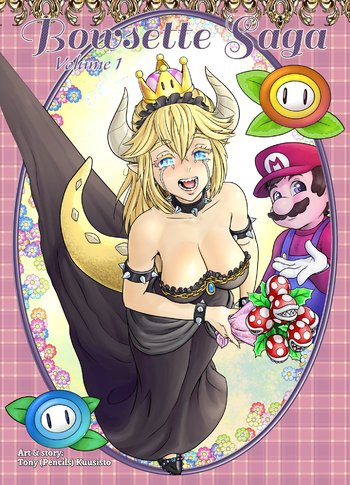 In the wake of Super Mario Odyssey, Bowser decided to work with Mario on a plan to make Peach jealous. He then used the power of the Super Crown to become the gorgeous (if partially monstrous) blonde bombshell Bowsette. To her genuine surprise, Bowsette falls in love with Mario and ends up marrying him.

This is where the story starts, with Bowsette finally finding happiness. But after an angry and drunken Peach plants a seed of doubt in Bowsette's mind, one that Kamek unwittingly fertilizes, she sets out to make certain that her happy ending doesn't disappear.

Starting off as a one-page comic, Tony Kuusisto's Bowsette Saga is now running three chapters strong and with more on the way. All of the pages can be found here in chronological order.

The artist also uploads new pages to their tumblr

as they are created.

Readers be advised that this comic is technically Not Safe For Work; no explicit pornography ever occurs, but there are frequent partial shots of "tame" female nudity (buttocks, the side of the breast, covered-nipples cleavage, panties, etc).